I took advantage of cool clear weather and a rare free 2 day weekend to go back to Barstow. After an early morning start from the motel I drove through downtown. Beware! In the 4 miles to Hwy 58 there are 5 different speed limits, 25, 30, 35, 40 & 55 mph. 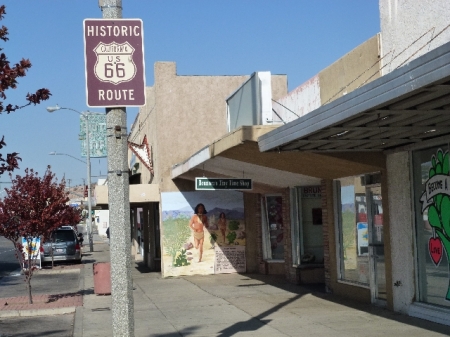 A few miles later, on a random side look I saw this rock arrangement. There’s a Planes Trains & Automobile cache behind the bush. It must’ve been someone’s 800th find.

I didn’t plan on caching the Peace Sign series on this trip. But I couldn’t resist making a turn onto Road to Peace (GC45C5D) and ended up finding 19 peace sign caches along the western edge of the geoart. (see map at bottom) Instead of the 35mm film containers of the neighboring Planes Trains & Automobiles, the containers were soda bottle blanks. They look exactly like test tubes with a screw on cap. The caps were painted brown or green making these caches very hard to spot. And they were all in thorny bushes. Hand scratches are annoying but an eye poke will ruin your caching day. I recommend eye protection. My sunglasses saved me a few times. 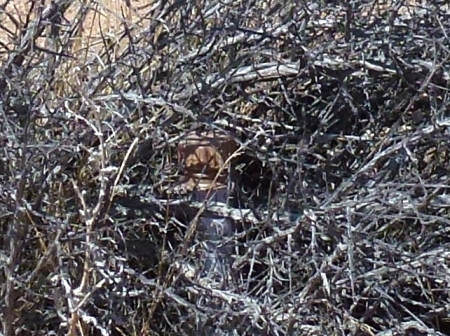 When the road turned away from the “hand” I decided to go for my original target, the inside/back of the RV series. I hiked all 24 remaining caches there. Most of them were film containers but one was an Albackore-designed mini decon. Like the other ones I found over the last year, it was holding up exceptionally well. 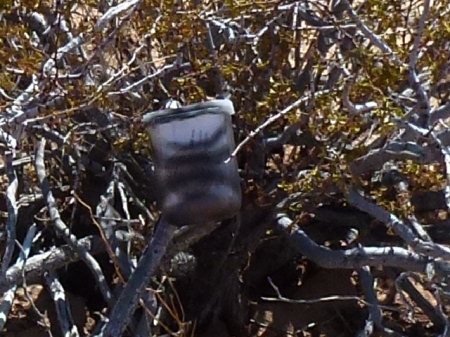 I hiked past a huge burrow. Whoever lives in there might’ve been big enough to be dangerous. So I moved fast to the next cache.

The BIGGEST container of the day was a case for an RPG (rocket propelled grenade) round. It was surprisingly roomy inside and held a lot of swag.

And as in previous desert caching posts, I’m going to complain about cachers who drive “cross country” to caches that are meant to be hiked.

I would’ve missed this yucca pod if I’d driven.

After the RVs, I crossed Hwy 395 and found 12 “Wandering Heroes” caches and added to the series with new caches for Retrofit (GC488C6), Foocachers (GC488CJ) and bleed_blue_LA (GC488D2). I finished the day with 62 finds and an early season tan, then went back to the motel.

To celebrate sissopolis’ birthday, Foocachers (Sr) planned a “forest hike,” something that siss always likes. He reassuringly said to those worried about the weather, “there might be a LITTLE white on the ground.” As we wound or way up Route 2 and approached Mt. Waterman it was obvious that Foo was wrong! 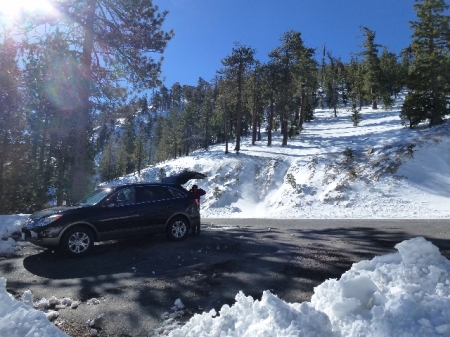 The very beginning of the hike was mostly flat, a good thing because at age 52 it was my first time in snow. Everyone else had prior experience from ski trips and or living in snow country. I never slipped or fell but I expended more energy than the others by walking inefficiently.

The temperature warmed up into the 50’s. Gloves came off and made pushing GPS buttons and picture taking easier. 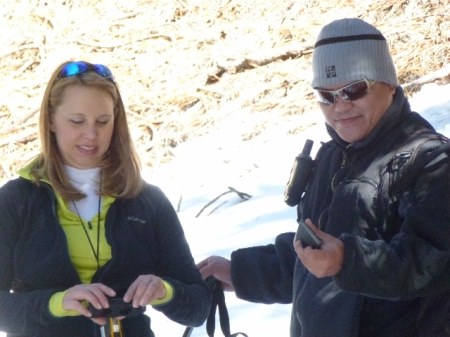 A few of the caches required stomping off trail. But the snow was always under a foot deep.

EcuaDeb & siss recently read a female hiker’s travelogue about the Pacific Crest Trail (PCT). So they were excited to see a PCT sign. 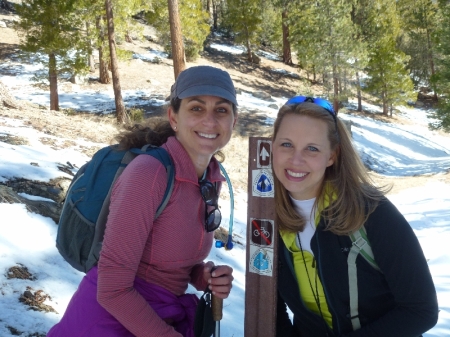 Searching for caches in the snow was a completely new experience. I think that only scuba caches are harder.

The downhill half of the hike ended with a stream crossing. No one fell (or was pushed) in.

Surprisingly no snowball fights broke out. Only a few were thrown. I threw my first one ever and even hit the target tree trunk! 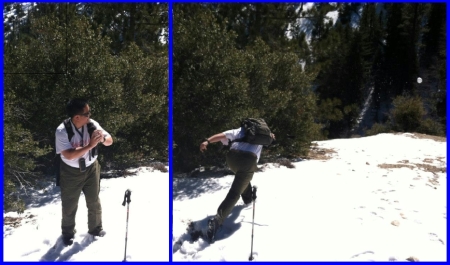 We stopped for lunch at a trail junction and then hiked uphill to the 2nd car. (Albackore, Foocachers Sr / Jr) 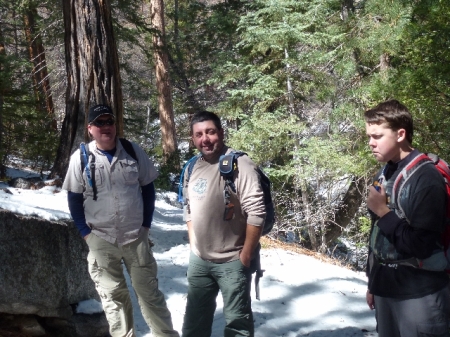 A few sections of the uphill were narrow single tracks. 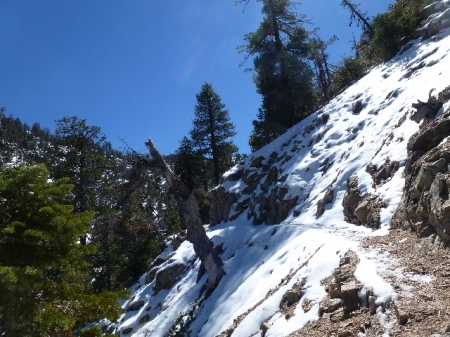 The scenery was especially good.

Near the end we walked through an empty campground.

As usual on uphill hikes I was the last to finish. Deb was waiting with her famous brownies.

Thanks Foo for picking the location and Deb for driving. And happy early birthday, siss!!